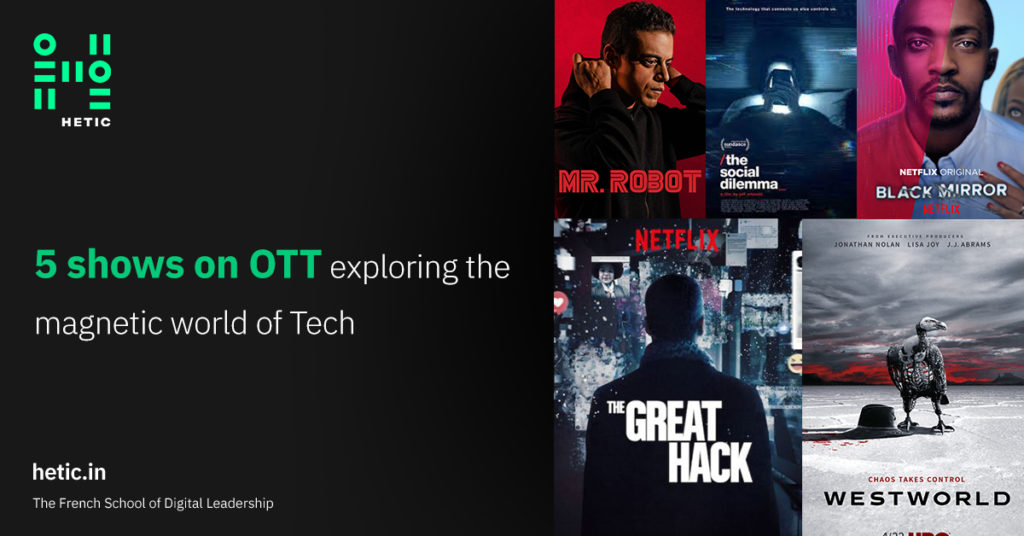 Did you know the internet is more than 30 year old?
Over these 3 decades our lives have been revolutionized with technology. Emerging technologies and wide spread digital and social media have inspired the entertainment sector to produce thrillers, dystopian storylines and documentaries. These movies, shows or documentaries reflect how tech has impacted our daily lives, mental health, politics, economy, data privacy and much more. Not only do these films explore the future, but also offer a learning on what these technologies mean, how they are being utilized and their impact on society globally. Some of the most impactful and must watch movies/shows in the past decade are:

The Great Hack: Documentary Film
Who would have imagined that politics could directly benefit from big data and targeted social media campaigns a few decades ago. The Great Hack is a documentary film that brings to light the dark side of social media channels that have been utilized as a key weapon to use as a ‘political-voter surveillance’. This film is about the Facebook-Cambridge Analytica (CA) data scandal wherein CA- a political consulting firm harvested data from millions of social media users ( Facebook) without their prior consent or knowledge and used that information to influence the voters by building targeted political campaigns for their clients.

The CEO of Cambridge Analytica (CA) was exposed by Channel 4 ( a US national news channel) for having 5000 data points on every American citizen that can be used to influence the votes during elections. Voices of multiple key figures from investigative journalists focused on exposing CA’s dark side, to a few whistleblowers from within the companies, the film dwells deep into how there still exists a lack of transparency and security issues with respect to data privacy on the internet. This film is sure to engage you and make you think deeply if  your data is really safe each time you sign up for a new application or social media website that says ‘your data privacy is important to us/ your data is safe with us’.

Read more: How will digital disruption impact your career?

Social Dilemma: Documentary Film
While The Great Hack examines data privacy and the dark side, Social Dilemma explores and examines how social media channels are designed to manipulate and influence people’s views, emotions and behavior as well as their mental health ( especially for young adults and teenagers). How these channels are used to spread misinformation, unproven theories and conspiracy theories simply to aid profits.

Featuring interviews with many former employees of the world’s leading tech social media platforms ( including Google, Twitter, Facebook and more), the film shows how social media channels have led to negative and problematic social, political and mental health consequences. Expert interviews in the film throw in our faces a harsh reality of ‘If you’re not paying for the product, then you are the product’. From discussion on the role of social media radicalizing people via targeted algorithmic advertising in the political landscape of the United States to how these channels have been used to spread fake news, the interviews showcase how the youth is being radicalized on the internet. Together with The Great Hack, these docu-drama films are sure to give you a wake up call on the manipulative impact and effects of social media in your day to day life.

West World: Science fiction series
A series that starts with a theme park filled with life-like robots, identical to and indistinguishable from humans. These robots reflect the lives of old America’s old west lifestyle and real humans with deep pockets get the opportunity to visit the theme park to engage in their wildest fantasies and experience fantasy lives as cowboys, engage in consequence free twisted battles, violence and debauchery with robots. Any robots that die during this battle are fixed and reset at the end of the fight and are good as new. The series then brings in the real twist by building a storyline that makes robots gain the ability to remember their pain and suffering after multiple reboots to their system. At what point will the robots be able to feel emotions, feelings and regular human expressions?

Jeff Jensen of Entertainment Weekly lauded the series and quoted ‘The depth of Westwolrd lies not in asking questions about memory, free will, and what makes us human, but in weather we can become more human than what we let ourselves to be, whether our stories can be richer and more meaningful than what the culture allows’

The deep use of simulations, and a world of AI in our everyday lives explored in this series is sure to make you question on where to draw the line in embracing the world of artificial intelligence in decision making.

Blackmirror: Anthology TV series
A British television series takes inspiration from the world of emerging tech and pushes the story line to reflect on how these apps have built a culture of over production and consumption.

How so? Well, imagine a world in which your social media ratings will decide which locality you can live in, determine the priority you get in a queue at a coffee shop, what hospital you will be admitted to or only a certain rating ( on social media) will decide who you can be friends with or date. Each episode is a different story line that raises the thought in our head each time – this could very well come true in the near future. Near in the near future, seemingly closer than we think.

This is one series where you will find diversity in genres, all mostly dystopias based on science fiction technology and speculative fiction. Blackmirror is known to reflect on the issues surrounding our daily lives, use of social media and the raising concerns for how far can we stretch its use.

From killer machines, to criminals living in never ending real life simulations and experiencing the real pain each time, this series has it all. Unbearably bleak sounding episodes, to uplifting tales of tech. If you are aiming to learn on how far tech can take us in our real lives, and what are the consequences of going that far, Blackmirror is one show not to be missed.

Mr. Robot: Drama thriller TV series
A cyber security engineer leads a double life in this drama thriller as a vigilante hacker. He is shown to have social anxiety disorder and clinical depression in the series. This hacker is shown to be recruited by an insurrectionary anarchist, also known as Mr. Robot, to join a group of hackers that promote disruption on the internet demand social-political change. Targeting one of the worlds largest companies, this group of hackers aims to destroy all debt based records by encrypting the financial data of the company.

From the first show itself, the lead cast is seen to be using strong jargon of the cyber security world, terms like ‘Tor networking’, ‘exist nodes’ to ‘onion routing protocol’.

What you can learn from Mr. Robot –  Well, this show is sure to get you educated on cyber security, its terminology and the world of hacking.

After watching this show, you sure can find yourself being paranoid about your own passwords being too weak, changing your passwords often and being concerned about calls with your bank.